The Milanesa Napolitana, a short history 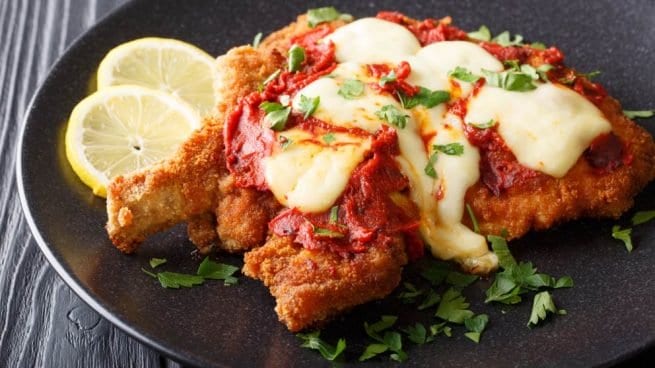 What is a Milanesa?

There’s something suspicious in the name Milanesa Napolitana. Anyone who knows a bit about Italy will know that it’s not easy not get a Neapolitan and a Milanese to agree, much less create a dish together. So how did this delicious breaded steak covered in tomato sauce, ham and cheese came to be? And why is it one of the most popular foods in Argentina?

Indeed, Argentines have some kind of love affair with milanesas, and virtually any restaurant, no matter the specialty, will have some version of it. Part of that has to do with the historical link between Argentina and Italy: almost 3 million Italians moved to the South American country between 1880 and 1970.

The breaded steak in Italian history

The typical Argentine milanesa does come from Italy, as the name implies. Its origin resides in the Costoletta alla Milanese, which was first mentioned in a banquet in Saint Ambrose Basilica, Milan, in the year 1134. “Lunbulos cun panitio” it says, that is, breaded beef. There is some controversy between Italy and Austria, since the Austrians claim to be the actual creators of the dish, which they call Wiener Schnitzel. However, it seems that it was actually the Italian recipe that spread to Austria during their occupation of Lombardy in the 19th century.

The Italian version is made with tenderloin cut between the first and sixth rib (with the bone included) breaded and fried in butter. The Argentines, however, do it with different cuts of beef (no rib) and fried in vegetable oil.

But, what about the Neapolitan thing?

Were the Neapolitans the ones who decided that the milanesa would be a lot better with ham, cheese and tomato sauce on top? Short answer: not at all. It turns out that this culinary innovation took place in Buenos Aires, and the real name should be Milanesa alla Napoli.

It turns out that there was a restaurant in downtown Buenos Aires called Napoli, named after its owner, José Napoli. Being close to a famous boxing stadium, it had a regular clientele of boxing spectators. One such client was a big fan of the restaurant’s milanesas, to the point of being the only thing he ordered. One day, he arrived quite late, when the restaurant was on the verge of closing, and ordered the same thing he always did… and just in time, because there was only one milanesa left. However, something tragic happened: the milanesa got overcooked. Eager to hide it from his customer, Mr. Napoli remembered an old recipe from the Aosta Valley in Italy: the Costoletta alla Valdostana, which is similar to the Costoletta alla Minalese but with ham and cheese. Mr. Napoli needed extra moisture, so he also added tomato sauce. ¡The customer was delighted! He thought he was having the honor of trying a new dish that was not yet on the menu. ¡And he loved it!

From that moment on, Mr. Napoli began offering the Milanesa alla Napoli in his restaurant, which became a huge success. Soon, it had conquered the country.

From Buenos Aires to Madrid: The Milanesa Napolitana of Cedrón

At Cedrón, we offer a delicious Milanesa Napolitana made from pork, with tomato sauce, boiled ham, mozzarella cheese, fresh tomatoes and oregano. A new take on the Italian-Argentine classic, to be enjoyed by anyone, no matter what country they’re from.